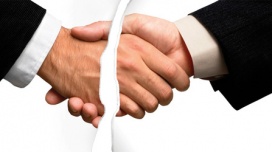 A contract is a legally enforceable promise, either made in writing or orally. Breach of contract occurs when one or more parties to a contract break that promise by failing to perform or fulfill any term of the contract without a legitimate legal excuse. A breach can occur in one single instance or it can be ongoing and continuous. Examples of breaches of contract include failure to make payment in full or on time, failure to deliver all the goods, substitution of inferior or significantly different goods. In the case of employment, breach could occur when one party fails to finish a job they were hired to do, an employer terminates an employee before their contract is up and or an employee quitting before their contract is up.

A “material” breach of contract occurs when the breach strikes so deeply at the heart of the contract and defeats the sole purpose of making the contract. If there is a material breach, the non-breaching party can simply end the agreement and go to court to try to collect damages caused by the breach.

For example, if you contracted with a car dealership for a BMW Z4 Roadster with a radio and fancy hubcaps, but the Roadster that was delivered lacked the fancy hubcaps, it is unlikely that the court would find that there was a material breach. Although you likely wouldn’t be able to cancel the contract, given that you did receive the make and model of the car that you contracted for, the court might require the dealership to remedy the situation such as by requiring it to install the radio and the hub caps. On the other hand, if dealership promised you the very Ford Mustang driven by Steve McQueen in Bullitt, then presented you with a brand new Mustang, then it could be said that the dealership made a material breach. In this instance, your bargain wasn’t about the make and model of the car; it was about one particular vehicle.

If the breach is something that can be fixed with reasonable effort or expense, while keeping the contract in effect, it’s less likely to be material. Consider the hubcap-free, radio-less BMW, mentioned above. Because the dealer could easily fix the problem by installing the promised features, there would not be a material breach of the contract, and you wouldn’t be able to cancel

If someone has breached a contract with you, whether it be in regards to goods, services, or your employment, do not hesitate to contact the attorneys at Mashel Law, L.L.C. and let our experience work for you.