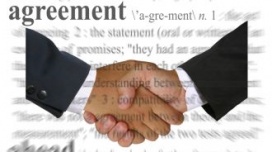 A contract of employment is a category of contract used in labor law to attribute right and responsibilities between parties to a bargain. On the one end stands an “employee” who is “employed” by an “employer”. It has arisen out of the old master-servant law, used before the 20th century. Put generally, the contract of employment denotes a relationship of economic dependence and social subordination. In the words of the influential labor lawyer Sir Otto Kahn-Freund,

“the relation between an employer and an isolated employee or worker is typically a relation between a bearer of power and one who is not a bearer of power. In its inception it is an act of submission, in its operation it is a condition of subordination, however much the submission and the subordination may be concealed by the indispensable figment of the legal mind known as the ‘contract of employment’. The main object of labor law has been, and… will always be a countervailing force to counteract the inequality of bargaining power which is inherent and must be inherent in the employment relationship.”

A contract of employment usually defined to mean the same as a “contract of service”.[2] A contract of service has historically been distinguished from a “contract for services”, the expression altered to imply the dividing line between a person who is “employed” and someone who is “self employed”. The purpose of the dividing line is to attribute rights to some kinds of people who work for others. This could be the right to a minimum wage, holiday pay, sick leave, fair dismissal, a written statement of the contract, the right to organize in a union, and so on. The assumption is that genuinely self employed people should be able to look after their own affairs, and therefore work they do for others should not carry with it an obligation to look after these rights.

The terminology is complicated by the use of many other sorts of contracts involving one person doing work for another. Instead of being considered an “employee”, the individual could be considered a “worker” (which could mean less employment legislation protection) or as having an “employment relationship” (which could mean protection somewhere in between) or a “professional” or a “dependent entrepreneur”, and so on. Different countries will take more or less sophisticated, or complicated approaches to the question.

Know when you should — and should not — ask a new employee to sign a written employment contract.

What Goes in an Employment Contract?

What About Written At-Will Agreements?

When we refer to written employment contracts, we mean a contract that limits the employer’s right to fire the employee, usually by detailing the grounds for termination or setting a term of employment (for example, one or two years).

Some employers require employees to sign a written agreement stating that they are employed at will — that is, that they can quit at any time, and can be fired at any time, for any reason that is not illegal. Employers might ask employees to sign an offer letter, handbook acknowledgment, or other document agreeing to at-will employment, for example. These documents do not limit the employer’s right to fire the employee. Instead, they affirm the employer’s general right to fire at will.

Employment contracts can be very useful if you want control over the employee’s ability to leave your business. For example, if finding or training a replacement will be very costly or time-consuming for your company, you might want a written contract. It can lock the employee into a specific term (for example, two years) or require the employee to give you enough notice to find and train a suitable replacement (for example, 90 days’ notice). While you can’t force someone to keep working for you, an employee is likely to comply with the agreement’s terms if there’s a penalty for not doing so.

Employment contracts might also make sense if the employee will be learning confidential and sensitive information about your business. You can insert confidentiality clauses that prevent the employee from disclosing the information or using it for personal gain. Similarly, a contract can protect you by preventing an employee from competing against you after leaving your company. (For more on this, see Nolo’s article Noncompete Agreements: How to Create an Agreement You Can Enforce.)

Finally, using an employment contract can give you greater control over the employee. For example, if the contract specifies standards for the employee’s performance and grounds for termination, you may have an easier time terminating an employee who doesn’t live up to your standards.

An employment contract is not a one-way street. The contract binds both you and the employee, so it limits your flexibility. This may pose a problem if you later decide that you don’t like the contract terms or the needs of your business change. In those circumstances, if you want to change the contract or terminate it early, you’ll have to renegotiate it — and there’s no guarantee the employee will agree to what you want.

Another disadvantage of using employment contracts is that they bring with them a special obligation to deal fairly with the employee. In legal terms, this is called the “covenant of good faith and fair dealing.” If you end up treating the employee in a way that a judge or jury finds unfair, you may be legally responsible not only for violating the contract, but also for breaching your duty to act in good faith.