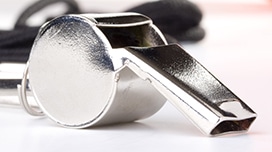 New Jersey’s Conscientious Employee Protection Act (CEPA) statute has been described as the most far reaching “whistleblowing statute” in the nation. CEPA was enacted to protect employees from retaliation after they disclose or object to (“blow the whistle”) activities of a coworker or employer which they reasonably believe are unlawful or are contrary to federal or state public policy. Also, CEPA prohibits an employer from retaliating against an employee who is a licensed medical professional who discloses, objects or refuses to participate in any activity, policy or practice which the employee reasonably believes is contrary to the health and safety of a patient. CEPA allows an employee to use various avenues to recover damages including reinstatement, lost wages, punitive damages, reasonable costs, and attorney’s fees.

The purpose of CEPA can be further understood by comments made by former Governor Thomas Kean when signing CEPA into law:

“It is most unfortunate, but nonetheless true, that conscientious employees have been subjected to firing, demotion or suspension for calling attention to illegal activity on the part of his or her employer. It is just as unfortunate that illegal activities have not been brought to light because of the deep-seated fear on the part of an employee that his or her livelihood will be taken away without recourse”.

To establish a CEPA violation, a Plaintiff is required to show: (1) a reasonable belief that the employer's conduct was violating either a law, rule, regulation, or public policy; (2) she performed a "whistle blowing" activity; (3) an adverse employment action; and (4) a causal connection. See Kolb v. Burns, 320 N.J.Super. 467, 477-78 (App. Div. 1999). Under the first prong, the trial court must first determine as a matter of law whether the plaintiff has identified a source of law or public policy that relates to the "complained-of" conduct. See Dzwonar v. McDevitt, 177 N.J. 451, 464 (2003); Mehlman v. Mobil Oil Corp., 153 N.J. 163, 186 (1998). Once the trial court does so, the jury is then asked to determine as a question of fact whether the plaintiff reasonably believed that her employer was violating the identified law or public policy. Id.

Under CEPA, “a Plaintiff must set forth facts that would support an objectively reasonable belief that a violation [of a law, rule, regulation or clear mandate of public policy] has occurred.” See Dzwonar, supra., 177 N.J. at 464. “[T]he trial court must [then] make a threshold determination that there is a substantial nexus between the complained-of conduct and a law or public policy identified by the court or the plaintiff.” Id. If the trial court so finds,  [902] the jury then must determine whether the plaintiff actually held such a belief and, if so, whether that belief was objectively [27]  reasonable.” Id.

In deciding whether a Plaintiff has sufficiently identified a source of law or public policy that relates to the “complained-of” conduct, a trial court must consider that, “[a] plaintiff who brings a claim pursuant to [CEPA] need not show that his or her employer or another employee actually violated the law or a clear mandate of public policy.” Dzwonar, 177 N.J. at 462. “Instead, the plaintiff simply must show that he or she ‘reasonably believes’ that to be the case.’” Id. (citations omitted). “[W]hen a plaintiff brings an action pursuant to [CEPA], the trial court must identify a statute, regulation, rule, or public policy that closely relates to the complained-of conduct.” Id. at 463. However, a plaintiff does not have to “allege facts that, if true, actually would violate that statute, rule, or public policy.” Id. That is because “[t]he Legislature intended CEPA to ‘encourage, not thwart, legitimate employee complaints.’” Id. (citation omitted). Indeed, “[t]he goal of CEPA … is ‘not to make lawyers out of conscientious employees but rather to prevent retaliation against those employees who object to employer conduct that they reasonably believe to be unlawful or indisputably dangerous to the public health, safety or welfare.’”. Id. at 464.

In addition, “[a] CEPA claim that is based on fraud … can rest on allegations about the activities of a co-employee.” Battaglia, supra., 214 N.J. at 557 (emphasis added) (internal citations omitted). “The focus is on whether the employee making the complaint reasonably believed that the activity was occurring and that it amounted to fraud.” Id. “The issue is not whether in fact other employees were engaged in the activity complained of or whether the activity met the legal definition of fraud.” Id. “Instead, the question is whether the complaining employee had a reasonable belief that the activity was fraudulent and complained about it for that reason.” Id. "Retaliatory action" under CEPA “means the discharge, suspension or demotion of an employee, or other adverse employment action taken against an employee in the terms and conditions of employment.” N.J.A.C. 34:19-2e.

To satisfy the requirement of establishing a causal nexus between the Plaintiff’s whistleblowing activities and the adverse employment action(s) complained of, a Plaintiff must establish that his/her protected disclosures and objections and the retaliatory acts committed by his/her employer. This means the Plaintiff must show that the Defendant Employer intentionally retaliated against him/her because of his/her whistleblowing activities. The Plaintiff may prove this circumstantially or directly, by establishing that: (1) a retaliatory reason more likely than not motivated Defendant’s action; or (2) Defendant’s stated reason for the adverse employment action was pretextual and not the real reason for its action. See Fuentes v. Perskie, 32 F.3d 759, 764 (3d Cir. 1994); Estate of Roach v. Trw, Inc., 164 N.J. 598, 612 (2000) (holding that in “[e]xamining whether a retaliatory motive existed, jurors may infer a causal connection based on the surrounding circumstances”).

To make a showing of pretext, “the Plaintiff must point to some evidence, direct or circumstantial, from which a factfinder could reasonably either (1) disbelieve the employer's articulated legitimate reasons; or (2) believe that an invidious discriminatory reason was more likely than not a motivating or determinative cause of the employer's action.” Burton v. Teleflex Inc., 707 F.3d 417, 427 (3d Cir. 2013) (quoting Fuentes v. Perskie, 32 F.3d 759, 764-65 (3d Cir. 1994). The Plaintiff's evidence, if it relates to the credibility of the employer's proffered justification, "must demonstrate such weaknesses, implausibilities, inconsistencies, incoherencies, or contradictions in the employer's proffered legitimate reasons for its action that a reasonable factfinder could rationally find them 'unworthy of credence.'" Id. (quoting Fuentes, 32 F.3d at 765).

If you have been or are a victim of retaliation for having disclosed or objected to your employer’s conduct which you reasonably believe violates the law, regulation or a public policy, and/or is fraudulent, do not hesitate to contact the attorneys at Mashel Law, L.L.C. Do not delay because you only have one (1) year from the date you were fired or otherwise suffered retaliation in which to file a lawsuit under CEPA.